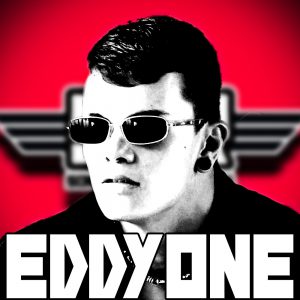 Sascha End aka eddy0ne, was born in the German town Homburg and started to spin records at the age of 16. Inspired by styles like Techno, Drum’n’Bass and House he began to produce his own harder beats with Fruity Loops at the age of 18.

2008 he’s got his first release on a netlabel called „Confuz“ with Kevin Blank. eddy0ne´s Hardtechno style was born.

He listened to Hardtechno more and more and became a very big fan of it. With his records collected over the years, he played his first Hardtechno gig as DJ at he age of 18.

In the age of digital music he is able to use his skills a lot more to produce beats and is watching out for labels until today. And there is no prospect of an end.