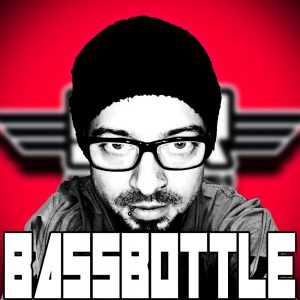 Bassbottle: Renowned producer, DJ and label owner for hard Techno. Mad musician, freak show monkey and entertainer. His tracks are played by all the big name DJ’s on the best-known events all around the globe.

First Musical Steps:
Bassbottle was born in 1982 in at that time still splitted Berlin. It wasn’t long until he discovered how to make sounds on his chimes and electric piano. He learned to play the guitar and joined a well-known choir for about six years. It was through these musical activities he trained his singing voice and obtained knowledge about harmonics and song structure.

As a child people often saw him banging on pots and pans, later drumming on the window sill at school. He then developed his own kind of beatbox, with which he often annoyed his teachers, who questioned „Whose Walkman is this???“. He has always been interested in rhythm. This is why he never passed the opportunity to play on a drum kit.

Youth And Electronic Music:
In his early childhood he discovered electronic music. His main influences at this point in time were on one hand commercial Dancefloor productions and on the other old Hardcore- and Gabber-tapes from the old Bunker club. Fascinated by the rave hymns of the time, he in 1996 took the chance to make his own debut track on a friend’s Amiga with a four patterns program. With that he constructed a song based on a melody he had in mind for years before. From now on he knew his way.

Progression:
With the years, after trying other programs and making excursions into other musical styles, his tracks became better and harder more and more. He also found out what the word „Schranz“ means, on which style he from now on conformed to. But also more tribal Techno is the ultimate for him.

In 1999 Bassbottle started deejaying and his record collection grew.

Public Attention:
In 2004 Bassbottle uploaded a few of his tracks into internet. Quickly he got a still rising fanbase. The mixsets he released one year later had also access. This lasted over the years. His first record on a lable appeared in 2005 and finally got the ball rolling for further releases.

He has also been booked as DJ with increased regularity, had many remarkable gigs and appeared on several internet radio shows.

In February 2009 the first release of his own label Sonic Speed Records has been published, followed by other successful ones in the years after. In 2010 Bassbottle surprised his fans with finally opening himself for digital releases. A boom of relevant releases was the result.

Present:
Meanwhile you’ll find Bassbottle on miscellaneous analogue and digital EP’s and compilations. Due to the unique style his music is appreciated by DJ’s and by his still growing fanbase – the so-called Sonic Speed Soldiers. The pleasant maniac was one of the inventors of melodic Hardtechno and still plays his sound live as DJ in front of a wild dancing and screaming crowd.